On April 19, 2022, CTC and GTCOM convened a meeting in Beijing to sum up the language services delivered for the Olympic and Paralympic Winter Games Beijing 2022 and commend outstanding individuals. On behalf of Beijing 2022, Wan Xuejun, deputy head of the International Relations Department, attended the meeting and made a speech, and Mei Jianjun, Director of the Language Services Division, read out the thank-you letter.Eric Yu, General Manager of CTC and Chairman of GTCOM, made closing remarks. 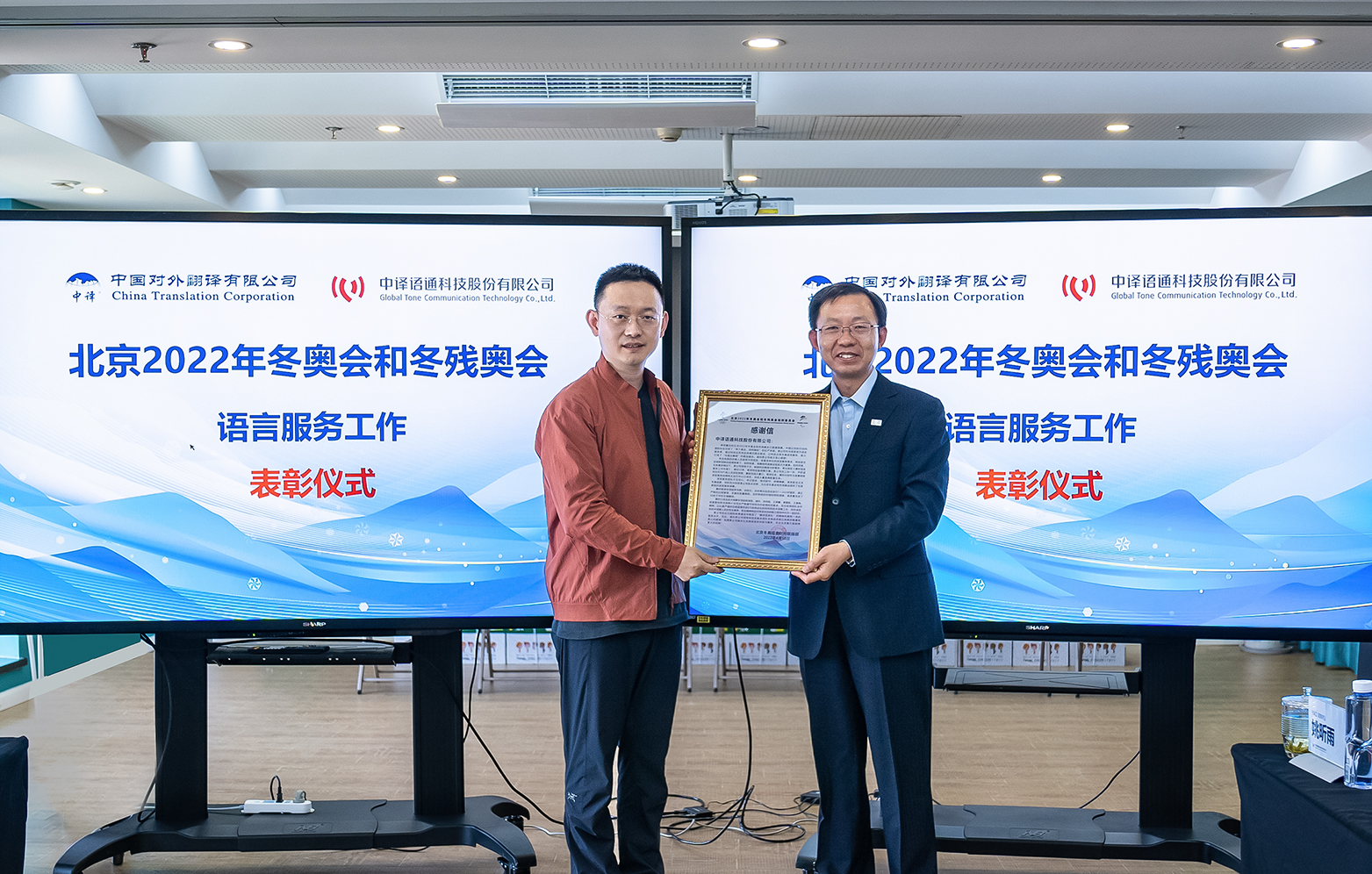 On behalf of the International Relations Department of Beijing 2022, Mr. Wan extended his heartfelt thanks to the company.He said that during the preparations for and hosting of the Beijing 2022 Games, the GTCOM team made remarkable contributions behind the scene, provided all-weather and comprehensive language services for all functional areas, built a bridge between China and the rest of the world, helped deliver a Olympic Games “free of communication barriers,” and won high praises from officials and staff of the IOC and the IPC.GTCOM is an industry leader in the integration of language services and technology, and has created a valuable legacy for the Beijing 2022Games through multi-lingualservices and made major contributions to the inheritance of Olympic knowledge, embodying the spirit of “bearing in mind the big picture, being confident and open, rising to the challenges, pursuing excellence, and creating a better future together.”

Mr. Mei read out a letter of thanks to GTCOM's language service team.“The language service team of GTCOM remained true to the original aspiration and kept their mission firmly in mind. They were responsible, hard-working and efficient. At the same time, they made full use of the company’s technical advantages, and provided high-quality and efficient language services for the Olympic and Paralympic Winter Games Beijing 2022. They translated more than 500,000 characters and words and provided interpreting services and technical support for over 670 meetings, showing the style as the “national team of translators and interpreters” and providing first-class language services.

Mr. Yu expressed his sincere gratitude to the International Relations Department of Beijing 2022 for their trust and support, and paid high tribute to all the translators and interpreters who worked hard behind the scene.He said that it is of special significance to provide language services for the Beijing 2022 Games.The company is greatly honored and strongly motivated by the client’s praise of the team’s “all-weather and comprehensive language services for all functional areas.”The history of CTC could be traced backed to 1973 when the United Nations Information Group was established after China restored its lawful seat at the United Nations in 1971. Starting from the Beijing 2008 Olympic Games, as a national team of translators and interpreters, the company has served many major international multi-sport events that took place in China.It was the behind-the-scene hard work of translators and interpreters that made special moments of the Games known to the world and made China’s voice heard during the Games.

Yu stressed that translation and interpreting are the root and soul of CTC. From traditional translation services to the development of language technologies developed by GTCOM, and to the application of multi-language big data and artificial intelligence, the company has steadfastly carried forward its fine tradition, and has been moving forward and growing stronger.The year 2023 will mark the 50th anniversary of CTC and the 10th anniversary of GTCOM. Our language services for the Beijing 2022 Games have left a big mark on the company history.

As the Beijing 2022 Games came to an end and members of the Games-time language service team returned to their routine work, the CTC and GTCOM will continue to support each one of them in their job as much as during the Games-time.“We have carried guns together, we have fought together, and we will create a future together!”

To conclude his speech, Mr. Yu said that the CTC and GTCOM will unswervingly carry forward the spirit of “bearing in mind the big picture, being confident and open, rising to the challenges, pursuing excellence, and creating a better future together,” as summarized by Chinese President Xi Jinping, remain true to the mission as a state-owned enterprise, forge ahead in the new journey and create a bright future.

The Olympic and Paralympic Winter Games Beijing 2022, which attracted worldwide attention, has been successfully concluded. China has honored its commitment to the international community to deliver equally fantastic Olympic and Paralympic Winter Games through concrete actions.As the official language service supplier, you, by combining language technology and a successful business model, have delivered tech-empowered language services for the Games and helped us deliver an Olympic Games “free of communication barriers.”A big thank-you for that.

The Games gathered people from different countries, speaking different languages and with diverse language service demands. In particular in the context of the COVID-19 pandemic, it’s vital to quickly and accurately deliver Games related information. Despite the tight schedule and heavy workload, you accurately analyzed the needs, took the lead in formulating the Games-time Language Service Manual, and refined the interpreting, translation and equipment support plans.In particular, your employees Sun Yibing and Yin Shihan worked as P1 staff with us. They completed a lot of interpreting and translation before the Games, and served as language service manager at a competition venue and an interpreter at the Main Operations Centre, respectively, during the Games, completing a lot of difficult tasks.

During the Games-time, the translation team of 26 were on duty 24 hours a day. With strict process management, sound quality tracking, timely and effective correction and preventive measures, they translated over 500,000 characters and words with high quality.

The Games-time interpreting and technical support team of 47, strictly observed the COVID-19 protocols inside and outside the closed loop, worked closely with each other and delivered high-quality simultaneous interpretation and technical support for more than 670 conferences. Their skills, professionalism and ability to respond to emergencies were spoken highly of by both Chinese and foreign attendees.

You impressed participants of this international sport gala with your competency as a “national team of translators and interpreters” and first-class services.Here, I would like to express my high respect and heartfelt thanks to you all, including the executives and all the members of the language service team. I wish you steady and sustained progress on developing language technology and services and greater achievements!

Xia Jianjun, Vice President of GTCOM, read the Decision on Commending Individuals with Outstanding Contribution to Language Services for the Beijing 2022 Games: the Outstanding Contribution Award was conferred to 24 individuals includingLuo Hongyan and Hou Haiqiang, and the Special Contribution Award to 19 others includingZhang Ning.Liu Siyuan and Xie Ling, heads of the translation and interpreting teams, each made a summary report on the language services.

The meeting was chaired by Wang Chongzheng, General Manager of GTCOM’s Language Technology Business Unit, and attended by members of the Language Services Division of Beijing 2022, and of GTCOM’s Games-time translation, interpreting, technical and logistics support teams.