GTCOM creates AI MerCube; sets to become the "Apple" of the translation industry

What can be done in one second? Can we translate half of a sentence or a complicated article of 16,000 words?

What can be done in one minute? Can we read a synopsis or prepare Chinese and English subtitles?

Can machine translation replace human translation? There is no final conclusion on this issue.

However, as the level of machine translation continues to improve, we get a step closer to success. For enterprise-level applications at least, the threshold of rapid demand and large amounts of data seem to have blocked human translators.

Although Internet giants such as Google and Microsoft have entered the field of machine-translation services, they haven't set foot into the area of vertical-level machine translation. The requirements of data and algorithms are dauntingly high.

To fill the gap, GTCOM took the lead in launching MerCube with rich corpus data and iterative algorithms. It's known as the world's first enterprise-level machine-translation hardware.

GTCOM's AI MerCube was launched on July 31, 2018, as an enterprise-level artificial intelligence server that empowers the future.

Eventually, in 2016, with the development of machine translation with greater accuracy and speed, GTCOM's NMT Chinese-English machine-translation engine was introduced, making GTCOM the first enterprise to provide NMT services in China.

Eric Yu, CEO of GTCOM, said, "It is no easy to stick to this long journey, as those who play in the machine-translation field are giants. Currently, our MT engine supports 37 languages. That's enough to cover 224 official languages of 233 countries and regions, and the support for official languages covers more than 90% of the world's population."

Everything was set except for one crucial aspect. In May 2017, based on the demands of the market, GTCOM began to create the prototype of MerCube.

To C market is fiercely competitive, but the -to-B market represents a new breakthrough. Although the machine-translation technology is constantly innovating, the service method sees no sign of renewal, as if time has simply passed it by.

Given such a circumstance, a team member at GTCOM said, "With the improvement of machine translation and driven by enterprise localization deployment requirements as well as the rigid need for security and speed, GTCOM is determined to build MerCube to connect front-end services with customized hardware engines."

Due to the increase in users and the new requirements for security and confidentiality, the stability and adaptability of various hardware and CPU brands can no longer meet the needs of enterprises. Accordingly, the enterprise-level artificial intelligence server has emerged.

Given the increased attention being paid to information security, MerCube provides an exclusive, privately deployed method where information runs in a controlled environment and original texts and translations are stored locally, thereby solving the data-security problem at its root.

Deep customization from software to hardware

Artificial intelligence companies have four major elements: data, algorithms, scenarios, and hardware. GTCOM has been consistently dedicated to data and algorithms, and consequently it has customized MerCube from software to hardware.

MerCube is powered by the NVIDIA Tesla V100, a top-class data center GPU that provides 30 times more processing power than an ordinary CPU server can. MerCube uses NVIDIA® NVLinkTM technology to deliver higher bandwidth and more links for increased scalability in multi-GPU and multi-GPU/CPU system configurations. For example, a single NVIDIA Tesla V100GPU can support up to six NVLink links with a total bandwidth of 300 GB/sec, which is 10 times that of PCIe 3. 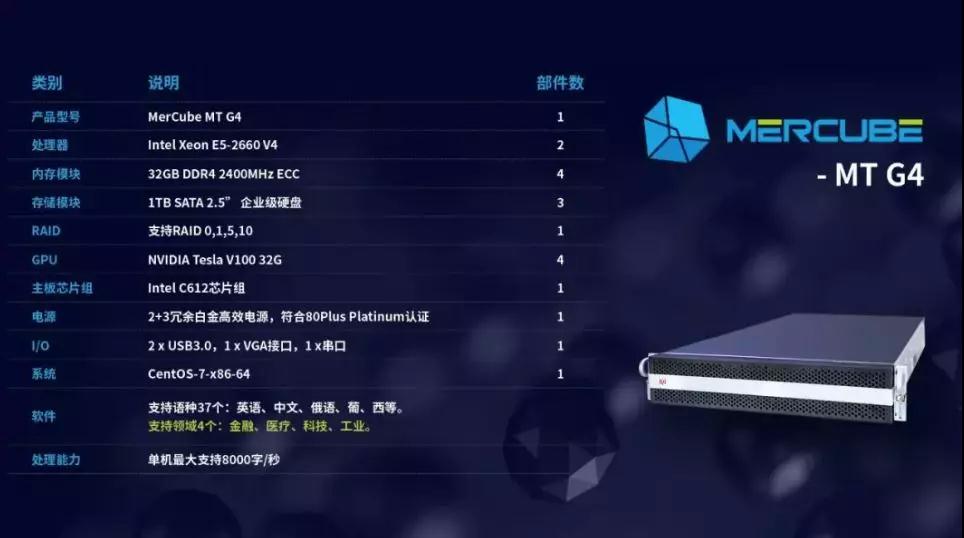 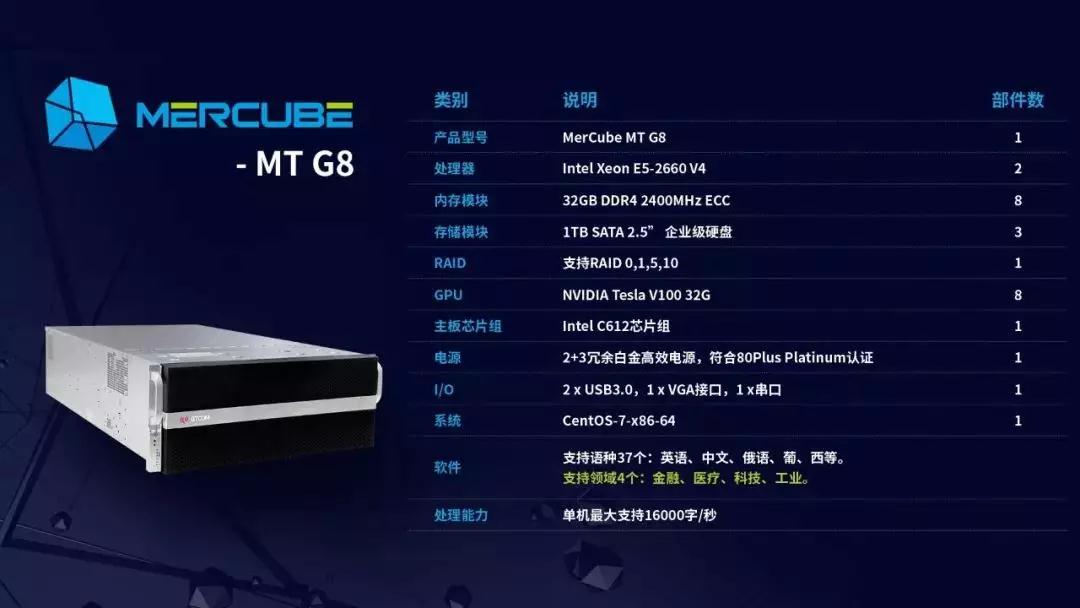 Machine translation is the core of GTCOM products. Based on this, such products as the webpage translation plug-in, the document-translation system, YeeCaption and the video analysis software have been developed to be seamlessly integrated with MerCube MT hardware, thus being able to comprehensively address users' needs and ensure security.

Document translation provides a useful example: A medical academic paper containing approximately 45,000 characters can be translated with GTCOM's document-translation tool in just a few seconds. It should be noted that the data is obtained without precluding the Internet lag. Moreover, the price of the paid document-translation version is only one yuan per 1,000 words. However, if the enterprise-level application service is chosen, it is only necessary to pay for the hardware and application.

MerCube is, in other words, a visual carrier of AI technology. It can flexibly match a translation engine, a speech-recognition engine, an NLP processing engine, and an audio and video processing engine to build user-specific AI intelligent hardware products and provide customized AI services for users. Thanks to high-speed translation, it easily responds to the huge information-translation needs of enterprises for considerable savings in manpower and financial expenditures.

As Eric Yu said, MerCube is in fact a type of all-in-one intelligent hardware that enhances service efficiency, data security and model adaptability while satisfying the business needs of today's enterprises. It's a solution that can be maturely commercialized in enterprises.

Today, MerCube is used in different fields such as medical care, finance, technology, and government affairs. Compared with Baidu, Microsoft, Google and other industry giants, GTCOM seems to have superior data volume and more promising development in the future due to different development focus and reliance on China Translation Corporation.

As we all know, high-level and high-quality corpus accumulation is one of the important foundations for machine translation. We have more than 5 billion sentence pairs of parallel corpora registered and 10 billion monolingual corpora, which are increasing at a speed of 200 million sentence pairs of parallel corpora and 500 million monolingual corpora each year. This is the biggest advantage of GTCOM.

YeeCaption and video analysis are also the main services of GTCOM. In the live demonstration, Chinese and English subtitles were automatically added to a video lasting dozens of minutes within 1 minute.

Eric Yu said, "For some special minor languages, the cost of a sentence pair of parallel corpora exceeds 1 yuan. Such a strong accumulation is incomparable to that of any of our competitors."

A ten-billion scale to be developed

According to GTCOM, the cost for configuring a complete set of MerCube is expensive from engine, hardware to software, but correspondingly, the enterprises' needs for translating massive information are met. Therefore, the savings in corporate manpower and financial expenditures can reach another magnitude.

Some insiders predict that the scale of the enterprise-level artificial intelligence server is close to 1 billion. Apart from the fields of finance, medical care, and technology, there is still a ten-billion market to be explored. The placement of nearly 1,000 MerCube orders in just a few days indicates that the enterprise-level server can empower the future.

Since the birth of iPhone, the era of smartphones has been opened with epoch-making operations and systems. Likewise, MerCube plays a similar role to iPhone, thanks to high-performance GPU, customized application, and efficient and precise service, attracting customers and leading the future.

It is understood that MerCube currently has no competing products in the industry. After all, no one would like to waste efforts to copy the success of other enterprises, but rather to lead the market and forge ahead in the blue ocean!